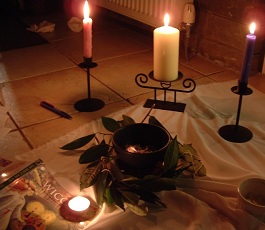 Magic, the word, has a truly magical effect upon people of all eras and ages. Ordinary people generally possess awe and fear for witchcraft, especially black magic. Whatever is not explainable through the knowledge and experience of everyday human beings has been labeled as magic. Sometimes, it was thought to be good, but most of the time, it had been regarded as something bad, something evil.

Many people have tried over the years to find an explanation for every magical incident. Some of their attempts reached the line of success, and some did not. Wiccans have practiced magic for a long time. They generally used magic for their rituals or religious purposes.

Not all Wiccan saw magic the same way

Wiccans had different beliefs and knowledge about magick. Some of them used to think that magick is actually the power that is already present in nature. Ordinary people only think of them as magick because they do not know them properly, neither they want to explore the reasons for such phenomena.

While others had a perception that magick was all about using the five senses, as per their best potential, if you can learn to control your senses or sense organs, then you will reveal the power of magick. This is not at all a supernatural phenomenon, instead quite natural. All you have to do is to make your body reactive and sensitive enough to make things work in your way.

Wicca spells are basically used for making a person powerful, both mentally and physically. From ancient times, it was used to heal someone. Spells can eliminate negativity from life and give enough protection from the external harmful factors. In short: the Wiccan spells are just perfect for bringing hope, positivity, and all the good qualities into life. If you can use them properly, then they can bring wonders to your life.

Generally, the term “black magick” gives a very negative vibe. It is true that, in the past, people mostly used black magick for the purpose of destruction, fulfilling vengeance over someone, and performing many more mischievous things. Wicca spells are normally used for the sake of a better lifestyle. Thus, Wiccans termed their magic as “white magick.” There is nothing evil or no mischief in it. Wiccan spells are for helping people to thrive for a better lifestyle, with divine happiness and joy.

Cast spells to solve your issues

With time, everything has changed, and so does people’s ideas regarding various things. A lot of experiments have been performed to evolve the Wiccan theory for the sake of humanity. Hence, it can be proclaimed that Wicca spells have some significant effects, and they are worth trying to solve common relationships or health issues.

You can either cast spells on your own or ask a professional to do it. Most spell casters will charge you (as it’s their profession), but sometimes some will be willing to spend their precious time and money to help you cast a free spell to help you solve your issues.