The Divinity in Wicca 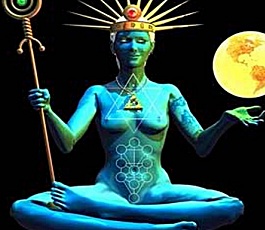 According to Wiccan perception, the theory of divinity is generally theistic. The existence of God and Goddess is very distinct in the Wiccan philosophy. Basically, Wiccans are polytheists, and they believe in several deities, resembling the Pagan philosophy. But, the perception of the God and Goddess varies a lot. Some see God as having a real or external existence. Whereas some feel that God is an imaginary spiritual thing. Whatever be the perception, the existence of God has always been observed in Wiccan philosophy, and the rituals are highly connected with the God and Goddess of Wiccans.

Modern era or 20th-century witches have defined the God and Goddess of the Wicca differently. They think the Wiccan God and Goddess have a strong resemblance with the Gods of the British Isles. After the death of Mother Goddess, two souls have been re-born. The rebirth of these two souls has a great impact on the Wiccan philosophy. The rituals are very widely connected with these reincarnated souls. Some famous persons, who practiced witch-cult in the 20th century, are Sybil Leek, Robert Cochrane, and Gerald Gardner. Gerald Gardner had also written a book on the witch-cult, which explains and illustrates various aspects of Wiccan culture, rituals, and witch-cults.

In the book of Gardner, lots of information on With-cult can be found. In his early days, he was an Army man and stayed in the forest areas for most of his life. During this time, he got in touch with several witches who used to live in the forest. In Gardner’s book, a lot of forest gods and goddesses could be found. As the witches lived in forest areas, they used to worship some Gods and Goddesses of the forest. The witch-cult, according to Gardner, is known as the Gardnerian witch-cult. It is followed by several witches these days.

Transmit to the body

If you study Wiccan philosophy deeply, you will find that Goddesses have more power than the Gods. Often goddesses are seen as having triple aspects. A key belief of the Wiccans is that Gods and goddesses can transmit to the body of high-level priests and priestesses. It is quite similar to Hinduism and Buddhism. So, some connections exist between the religion and rituals of the Asian sub-continent and the religion of the Wiccans. Few may feel that divinity in Wicca is complex and a bit confusing. Well, actually it is not! The form and purpose of worshipping God and Goddess have variations, but the basic perception about God has not been changed.